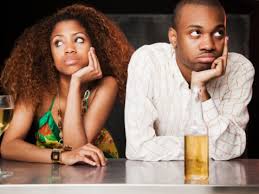 What inspired this topic. . .  Well, I was talking to a very close family member M.L.C (she will not allow me disclose her identity so I jumbled her initials). She told a story of a bizarre situation. . .  And now I will share her story with you. . .

M.L.C and a friend go out for a friday night drink, to a bar that they regularly frequent, she meet a cute guy , the chatted, he leaves,  she leaves. She goes to another bar, he texts her asking where she was, she tells him, he arrives. They flirt, chat, giggle over ridiculous banter, then he abruptly leaves.  He text her saying he had a great time but had to work early in the morning.

M.L.C couldn’t seem to find comfort with his answer, so the next day, boldly and securely she messaged him asking what happen, he honestly responded with a sorry-filled message telling her that he is married, a bad guy, did not want to lead her on and that his wife was out of town. She deletes his message and number. END OF STORY.

BUT OF COURSE I STARTED THINKING

Google is my source for all answers, so here is what I found.

A MOVC: “long story short, bored at work and with my marriage, make a okcupid profile, hot chick messages me, we text. . . i was going to meet her at a restaurant, but at the last-minute i decided against it. too risky i live in  small town, so going out in public would be dangerous i told her we should meet at a place an hour away so i wont recognize anyone. . .  basically i just want to bang and that’s it. i keep leading her on. . . im thinking i should just tell her the deal, that im married and if she is down, then lets do it”

I would consider this man beyond the verge and just about a full-blown cheater, his opportunity just hasn’t arrived, he doesn’t care about the layers of deception that comes with this life style, it simply seems as if his only worry is being caught.

I found this article on the FLY GUY CHRONICLES,  they discuss the six signs of a WOVC:

Decade and half-decade birthdays trigger navel-gazing-figuratively, and perhaps literally. A woman asks herself, “What have I been doing for the past 5 years?”

Women like to have projects and goals. When she reaches a milestone-say, in her career—she may start to think, Now what? says Bonnie Eaker Weil, Ph.D.

3. She’s Moving in with You

Yes, it was probably her idea. But now that you’re together 24-7 and sharing every detail of your lives, there’s not as great a need to keep the conversation flowing every minute.

Revenge affairs are common. Women have them in an attempt to restore self-esteem and feel desirable again.

5. She’s Not Getting Enough

Oxytocin, a hormone that plays a central role in our urge to bond, spikes to levels three to five times higher than usual just before orgasm. The hormone is more intense in females than in males, so women develop a stronger sense of bonding through sex.

She wants to dump you. Infidelity can break up couples, so she might cheat on purpose as an easy out

Signs of a MOVC according to the “EXPERTS” of Your Tango:

2. Gawking. Staring or making eyes with someone who isn’t your partner

4. Side dating. Agreeing to meet anyone for a “quick lunch,” “a drink,”

5. The brush. Playful as it may seem, brushing against one another can excite both of you as your bodies begin to manifest latent desires

6. Touching. Touching one another sends certain signals to your brain.

7. Lying. If you ever feel the need to start lying about what you and your friend are doing when you meet

8. Change in mood. If you’re suddenly happy, grumpy, absent-minded all the time or displaying any other noticeable change in behavior,

9. Change in appearance. If you begin to splurge on areas you didn’t before, such as a new haircut, lingerie, a gym membership

Theses sign may be helpful, but I believe regardless if you are a man or a women, in your soul, you feel a sense of disconnect with your partner.  Many couples, I believe, ignore this inner tug and then find themselves “surprised” when they have been deceived.